Turning onto an arc

When flying DME arc approaches, we need to turn on or off the arc, often at 90-degree angles. To do this precisely, it's good to have a simple rule to get it right, so that we can either be right on the target DME value, or roll out right on the inbound course. Fortunately, the way we're supposed to fly makes it relatively straightforward to compute when to turn.

If we make standard-rate turns of 3 degrees per second, then a 90-degree turn will take 30 seconds. Over that time, we'll fly an arc A with radius AR. 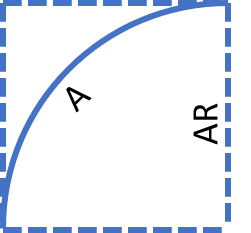 Because we always fly 30-second (half-minute) turns, the length of A will simply be our speed divided by that half minute. In a no-wind scenario, we'd use TAS as our metric, but then we might get pushed long or short if we have a headwind or tailwind. Thus, if our goal is to roll out on the 90-degree course, we're better off starting with GS, although in quartering crosswind scenarios that might put us slightly off. To get from knots to nautical miles, we just divide by 120, because there are 120 half minutes in an hour. Thus, A=GS/120. To get AR, we look at some more basic geometry, namely the relationship of circumference to radius, 2πr. In our case, we're flying a quarter circle, so A=(2πAR/4). If we approximate π to 3.14, then that gives us A=1.57AR. If we're after AR, we can invert that to get AR=.64A. That in turn means that AR=GS/(1.57*120)=188. Fortunately, 188 is within 6% of a nice big round number, namely 200, so we can use the following approximation:

So if we're flying along at 100 knots, we turn in half a mile short of the perpendicular course.